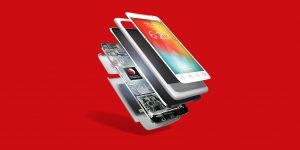 While buying a smartphone, one of the most significant aspects is its display. There is much more to a display than its resolution as has been proven time and again. Let’s take a look at what’s out there to better evaluate your choices.

Smartphone display acronyms can be a little overwhelming, but if you want to know what all the numbers and abbreviations associated with smartphone screens mean, we’ve got you covered. Want to know what each screen type is best for and what the differences in screen resolution mean? Read on.

LCD means Liquid Crystal Display, and its name refers to the array of liquid crystals illuminated by a backlight. They are popular choice for smartphones and many other devices because they are relatively low cost.

Retina is another marketing term, this time from Apple. A Retina display is not defined by a specific characteristic, other than that it is supposedly of sufficient resolution that the human eye can’t discern pixels at a normal viewing distance and has a pixel density over 300 ppi. As we already know though, Apple doesn’t measure ppi in the same way as other handset makers.

Full HD measures 1920 x 1080 pixels. Again, the pixel density will depend on how large the screen is overall. With smartphones at the 5-inch mark, the pixel density sits around 440 ppi, while on a 5.5-inch screen that number drops to 400 ppi.

Full HD is the next step up and is currently the standard for smartphone display definition, although 2K (QHD) has been gaining traction on high-end devices since the Oppo Find 7 and LG G3, the first commercially available devices to have QHD screens.

So simply having an HD display doesn’t mean much, as it will produce a very different image on a 5-inch screen form a 10-inch screen (note: screen sizes are measured on the diagonal to take account of slightly different aspect ratios).

One major consideration when we talk about smartphone screens can largely be boiled down to the resolution of the display, and as a rough guide, larger numbers are better here. Encompassed within this ‘resolution’ category is the size of the screen (in inches), the number of pixels (how much information it can show) and how densely those pixels are packed, referred to as Pixels Per Inch (ppi)

If you know the size of the display, you can work out how many pixels are squeezed into one square inch: that’s the pixels per inch (ppi) figure, which is referred to as pixel density.

QHD stands for Quad HD, which is four times the definition of standard HD. That means you can fit the same number of pixels as four HD displays into a QHD display of the same size. The pixel measurement for QHD is 2560 x 1440 pixels. A 5.5-inch QHD display has a pixel density of 538 ppi. For comparison, the pixel density of a 5.5-inch Full HD screen is 400 ppi.

Definitions are also often referred to by the smaller number of the pixel measurement, so HD will sometimes be called 720p, Full HD gets called 1080p and so on. With QHD though, the 2K name comes from the fact that the bigger of the pixel measurements is over 2000 pixels, which can admittedly be a bit confusing (and really ought to be referred to as 2.5K, if we were being entirely accurate).

You can probably see where this is going. Like 2K, the 4K name comes from the larger of the two pixel measurements, which are, technically speaking, 4096 pixels in 4K and only 3840 pixels in Ultra HD. So while these two terms are often used interchangeably, they are actually a little bit different.

AMOLED stands for Active Matrix Organic Light-Emitting Diode. OLED is an organic material that, like the name implies, emits light when a current is passed through it. As opposed to LCD panels, which are back-lit, OLED displays are ‘always off’ unless the individual pixels are electrified.

This means that OLED displays have much purer blacks and consume less energy when black or darker colors are displayed on-screen. However, lighter-colored themes on AMOLED screens use considerably more power than an LCD using the same theme. OLED screens are also more expensive to produce than LCD.

If you are opting for a high end smartphone, you are spoilt for choice. Most high end displays we have seen won’t disappoint you irrespective of the technology used. AMOLED is not always Samsung and Retina is not always Apple (although no one else uses the term). iPhone IPS LCD displays are currently manufactured by LG, Samsung has built displays for the iPad and not all Samsung devices are AMOLED either.