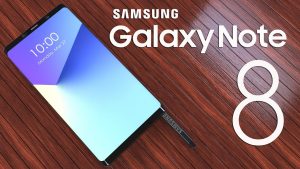 Samsung is launching the Galaxy Note 8 on August 23rd, and according to notable leaker Evan Blass (evleaks), it will be available as soon as September 15th. The handset, which is expected to be the most potent handset Samsung has ever built, will pick up where the Galaxy S8 left off, adding in more power, more specs and, overall, better performance.

In addition, you’ll reportedly be able to pre-order the phone on August 24th, a day after the the company’s Unpacked event.

Pre-orders will come with either a 256GB microSD card and a wireless charger or Samsung’s cute Gear 360 camera.

The Samsung Galaxy Note 8 is widely believed to be the first 4K handset from Samsung. Beyond this Samsung will focus on quality, especially in the battery department, and further refinements to the handset’s performance and overall aesthetics.

Samsung Galaxy Note 8 WILL NOT feature a Home key. Instead, it will feature an all-display front that will allow Samsung to cram a bigger display panel inside the same sized chassis as last year’s Galaxy Note 7.

The dual-camera, Infinity Display, and slightly more squared Galaxy S8-style design are all present and correct as per earlier leaks. The Galaxy Note 8’s dual-camera hardware will be better than the equivalent dual-snapper on current-gen iPhone 7 Plus.

This is according to the latest research note from Ming-chi Kuo, the prominent analyst from KGI Securities who has a reputation for being accurate regarding Apple rumours.

The Note 8 will be 0.1in bigger than the Samsung Galaxy S8+, making it the largest handset Samsung has ever built. The Galaxy Note 8 may be the first handset to feature an upgraded version of the Qualcomm Snapdragon 835 – that is, the Snapdragon 836.

The Samsung Galaxy Note 8, true to form, will be one hell of a handset.